The PBCF (Propeller Boss Cap Fins) is an Energy-Saving device produced by Mitsui O.S.K. Lines Techno Trade Co., Ltd., an MOL Group Company. It is now in the spotlight worldwide due to its ability to help reduce a vessel’s impact on the environment. This article introduces the features and advantages of the PBCF. 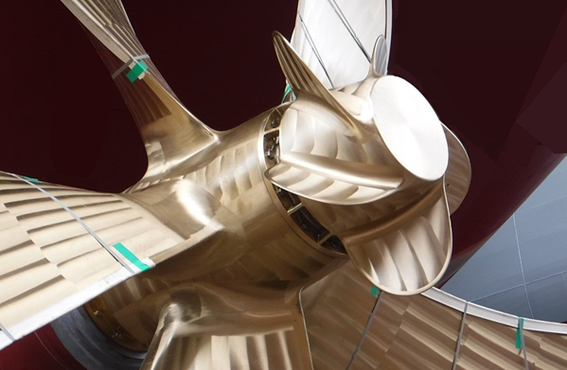 Most ships are propelled by a propeller attached to the rear of the hull, which rotates under the water.
The propeller is an excellent propulsion device that can propel a huge ship at a constant speed, but as the propeller rotates, it generates a rotating flow behind propeller that does not contribute to the propulsion direction.
In particular, when a conventional boss cap, which covers the center of the propeller, is used, a strong vortex is generated behind the center of a propeller (boss part) which is called a "hub vortex"* and results in a loss of propeller efficiency.
*hub vortex: the difference in flow velocity between the upper and lower surface of the propeller blade resulting in a strong downward flow from the trailing edge of the blade. The downward flow of each blade integrates into a strong hub vortex. As a result of the hub vortex, the propulsion energy of the propeller decreases. 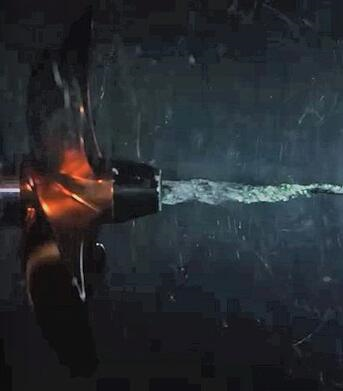 “without PBCF“ a hub vortex is generated from the boss part.

Therefore, the PBCF was developed to suppress the occurrence of this hub vortex. The PBCF is a simple device consisting of small fins attached to a boss cap that is installed to cover the boss. When a PBCF device is installed on the propeller boss, the hub vortex will be eliminated as downward flows after the blade are blocked by the fins of the PBCF. As a result, the PBCF increases thrust and reduces shaft torque, improving propeller efficiency. 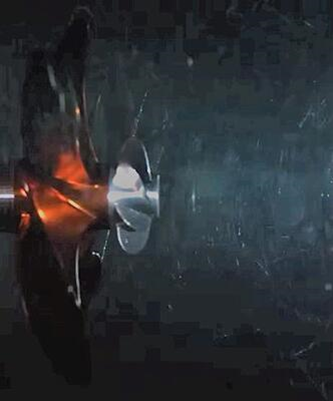 Development of the PBCF began nearly 40 years ago in 1983 by Mitsui O.S.K. Lines Co., Ltd., West Japan Fluid Engineering Laboratory, and Nakashima Propeller (at that time Mikado Propeller). The companies began joint research to lessen the reduction in propeller efficiency caused by hub vortex and improve energy efficiency. Its fundamental mechanism and effects were repeatedly verified through numerous model tank tests and actual ship measurements from the first stage of the development. They determined a fin shape that achieved a 3 ~ 5% improvement in fuel efficiency, and in 1987 launched sales under the name PBCF (Propeller Boss Cap Fins).
Since then, they have continued to research ways to further improve energy efficiency, and in 2017 began sales of an improved PBCF that increased efficiency by approximately 2%. 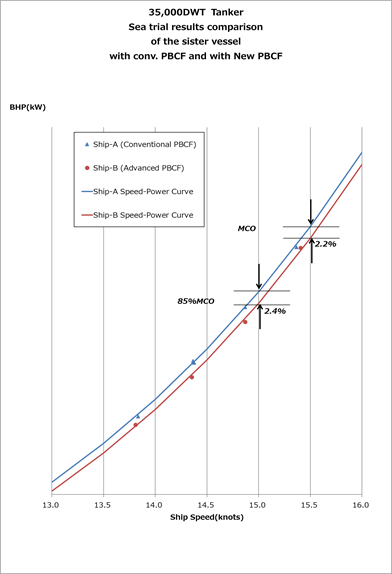 Four reasons for selecting the PBCF

The PBCF reduces fuel consumption by approximately 5%, contributing to a fuel cost reduction, which accounts for a large proportion of vessel operating costs. Furthermore, since large merchant ships mainly use fossil fuels (heavy oil), a reduction in fuel consumption is directly linked to a reduction in carbon dioxide (CO2) emissions. CO2 is one of the greenhouse gases (GHG) that causes global warming, and the PBCF is widely recognized as a device that reduces GHGs and contributes to the global environmental conservation.

Installation of the PBCF does not require any major work such as welding or modification, but simply bolts to the propeller like a normal boss cap. This system can be installed not only on new ships but on ships already in service by simply replacing the original boss cap with the PBCF and bolting it on.

The PBCF has a simple structure consisting of a frustoconical boss cap with a number of fins equal to the number of propeller blades, and has no moving parts in itself. No special maintenance work is required, and after installation on the propeller the effect will continue for the vessel’s lifetime.

It has become known through research by experts that the sound generated by ships in the water has an adverse effect on the living environment of marine organisms such as whales and dolphins. The impact of noise is currently the subject of discussions at the International Maritime Organization and other organizations. It has been confirmed in aquarium experiments that the PBCF helps reduce underwater noise by eliminating the hub vortices. 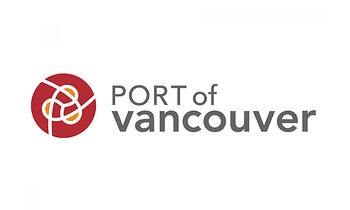 The Port of Vancouver in Canada, which is making efforts to protect the environment of its harbors, has listed PBCFs as an underwater noise reduction device in its environmental program, and has taken preferential measures to reduce harbor fees for ships that have the PBCF installed. This is one example of how PBCFs are recognized as a device that contributes to the protection of the marine environment.

Track record of more than 3,500 vessel

For the reasons given above, the PBCF has been recognized as an outstanding device worldwide and has been used on more than 3500 vessels since its launch in 1987. Of these, the improved PBCF, which was launched in 2017, has now been used on more than 300 vessels.
In addition, the PBCF as an energy-saving device is now attracting renewed attention due to the accelerated establishment and strengthening of international regulations for global environmental protection over the past few years.

There is currently a great deal of discussion around the world about strengthening actions to prevent global warming. Global warming began to attract attention among scientists in the 1970s, and the World Conference on Global Warming (commonly known as the Firaha Conference) held in Firaha, Austria in 1985 triggered international discussions on how to prevent global warming. In 1997, at the International Conference (COP3) held in Kyoto, Japan, it was decided that "The International Maritime Organization (IMO) should consider measures to reduce GHG emissions from ships."

Following further discussions, in 2012 new regulatory tools to improve the energy efficiency of international ships, including mandatory design requirements (Energy Efficiency Design Index (EEDI)) for new ships, were adopted. EEDI is a mathematical expression that showing the performance of a ship in terms of "CO2 emissions from the transportation of one ton of cargo per mile". It establishes standards for each type of ship and sets a schedule for gradual reduction. As a result, a GHG emission reduction program for new vessels was established, but for vessels already in service, only measures such as preparing operation plans were discussed, and no technical requirements were established.

However, as major climate changes due to global warming occurred in various regions of the world, the movement to reduce GHGs accelerated worldwide and the Paris Agreement was adopted at the international conference (COP21) held in Paris in 2015 as a "framework agreement for all member countries of the United Nations Framework Convention on Climate Change to act toward reduction targets”. In response to the Paris Agreement, there was an urgent need to strengthen measures for ships as well, and a reduction plan for all ships was discussed and approved at MEPC75 in November 2020.

As a technical approach, the Energy Efficiency Existing Ship Index (EEXI) was established to require ships in service to have the same level of fuel efficiency as new ships. The EEXI uses the same formula as the EEDI to evaluate the performance of a ship, and requires the same level of performance as a new ship. If a ship fails to meet this standard, it will be required to improve its performance.

At the same time, as an operational approach, it has been decided that ships will be rated at one of five levels based on their Carbon Intensity Indicator (CII), and that ships with lower ratings will be required to take measures to improve their performance. After further discussions, it was agreed that these proposals will be adopted at an international conference (MEPC76) to be held in June 2021 at the earliest, and are expected to enter into force and be implemented in early 2023.

Many ships will be required to improve their performance in the near future to help prevent global warming. In these circumstances, the PBCF, which can be installed easily without any major work and improves the propulsive efficiency of both new and in-service ships, is now attracting renewed attention.
The PBCF will continue to assist in meeting the world's expectations for global environmental protection.

For more information about the PBCF, Please click below! 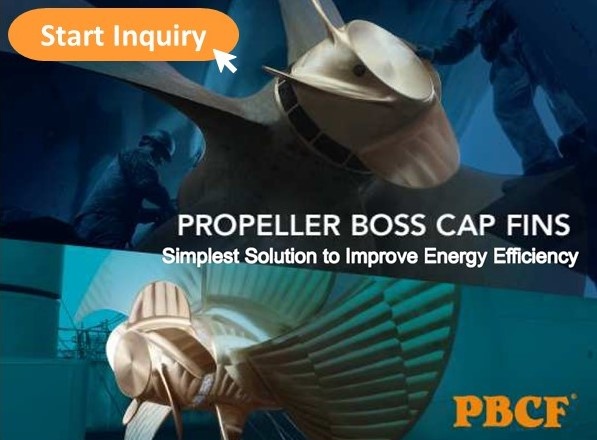 Joined Japan Line, Ltd. in 1982. After the merger, joined in MOL’s Technical Division, as technical worker focusing on new shipbuilding. Since 2010, I've been in charge of MOL Techno-Trade PBCF business and currently a technical advisor to MOL Techno-Trade.