History and Transition of Marine Fuel

In the shipping industry, the fuel used by ships is called "bunker". This comes from the days when ships sailed using coal as fuel, and the term "bunker" was used to refer to the storage facilities of coal.
With the passing of time, the energy used to power ships changed from manpower and wind power to coal in the 19th century, and then to oil in the 20th century. In the 21st century, as the world moves toward zero emissions, the need for cheaper and more powerful fuels is changing to more eco friendly and sustainable fuels.
In this blog, I will describe the transition of marine fuels and their adjustment to meet environmental concerns.

Propelled by Human and Wind Power

It is not known when humans began to use ships, but it is believed that ships began when people living near the water used bundles of tree branches to carry goods. This eventually led to the use of large rafts and log boats.
A wall painting of a nobleman's tomb in Egypt from the 15th century B.C. depicts a boat with a primitive sail and a rudder. During the Greek and Roman periods, galleys, which were mainly propelled by human-powered oars, were used in the Mediterranean and continued to be used until the 18th century. In the 15th century, large sailing ships called carracks started being built, mainly in Spain and Portugal, and in 1492 Columbus crossed the Atlantic Ocean by the carrack "Santa Maria." From 1519 to 1522, a carrack called "Victoria" one of the Magellan fleet made the first circumnavigation of the world.
In the 19th century, there was a move towards building large high-speed sailing ships called clippers. In the middle of the 19th century, tea clippers, built to transport fresh tea from China to London, started tea races. The first tea of the season by the fastest tea clipper was sold at unusually high price, brought the shipowner enormous profits and honor. Tea Clippers could reach a maximum speed of 20 knots (about 37 km/h) if the winds were favorable, and would have sailed faster than today's large ocean-going cargo ships. 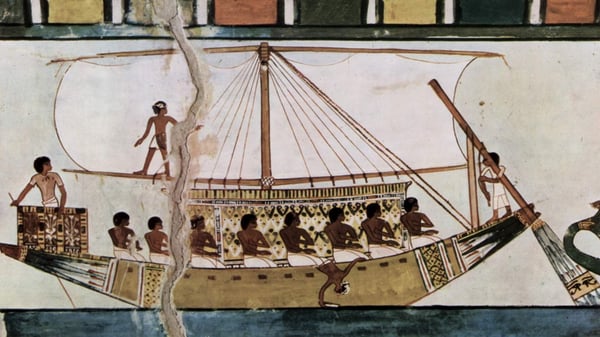 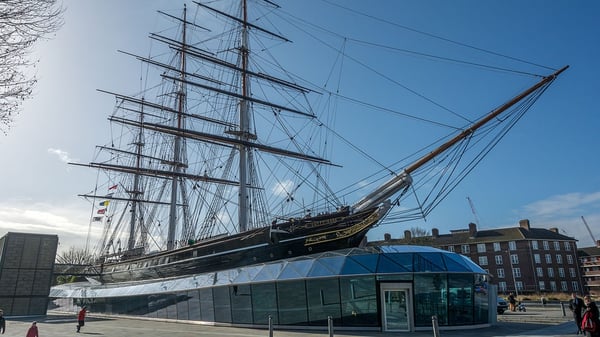 Above: Wall painting from Menna's tomb in Luxor, Egypt (15th century BC)
Below: Tea Clipper "Cutty Sark" preserved and exhibited in London (launched in 1869)
Source: Wikipedia

Development of Steamships and Introduction of Coal

Following the industrial revolution, steam engines were developed and continuous attempts were made to use steam engines to power ships. Fulton, from the United States, succeeded in putting them into practical use for the first time. He developed the "Clermont", a paddle wheel steamship, and began operation with passengers on the Hudson River between New York City and Albany in 1807.
However, steamships at that time required a large amount of coal and huge boilers in the center of the hull because their thermal efficiency was very low. Then, early steamships were not suitable for cargo transport because the main engine and fuel occupied much of the limited space on board. In addition, paddle steamer were not suitable for ocean navigation with severe weather and sea conditions because paddles on paddle wheel easily broke, a constant propulsion force could not be obtained due to the inclination of the hull due to waves, and frequent boiler explosions. Therefore, many of the early steamships were operated on rivers or lakes with calm weather and waves.
However, with improvements in marine steam engines and the change in the propulsion mechanism from the paddle wheel to the screw, ocean navigation by steamships gradually became possible. At first, steam engines were installed as an auxiliary power for large sailing ships, but eventually steamships powered only by steam engines became the standard, and ocean going ships shifted from large sailing ships to steamships powered by coal.
In 1878, Mitsui O.S.K. Lines (MOL) built its first steamship, "Hideyoshi Maru", which was used to transport coal from the Miike coal mine in Japan to Shanghai.

From Coal to Oil

Oil production began in the United States in 1859, and in the 1900s the fuel used to power ships was steadily converted from coal to oil. Since oil has a higher energy density than coal and more energy can be obtained from the same capacity, it was possible to reduce the size of the fuel tank on board and expand cargo space. It also meant a significant reduction in the number of crew members required as it negated the need to load coal and throw coal into the boiler.
The development of internal combustion engines led to the introduction of marine diesel engines, and ships began to convert their main engines to them, which had significantly higher fuel efficiency compared to the external combustion engines such as reciprocating steam engines or steam turbines. In 1924, MOL completed the construction of "Ondo Maru" and "Akagisan Maru", Japan's first large diesel-powered ships.
After World War II, along with the increase in the size of ships, the increase in the size of marine diesel engines, which use oil as fuel, had accelerated rapidly. At the same time, in order to reduce the costs of ship operation, there was a growing demand for cheaper fuel. Since the 1950s, the use of marine heavy fuel oil (HFO), which is mainly made from the remnant in the refining process of oil, began to increase. Following two oil crises that caused a sharp rise in oil prices, many large merchant ships in operation today, except for some specific types*, are fuelled by marine HFO.

* Most ships transporting liquefied natural gas (LNG) use the natural gas which vaporizes during transport (boil-off gas) as a fuel.

Currently, many large merchant ships consume marine HFO as fuel. However, because HFO contains air pollutants such as Sulfur Oxides (SOx) and Nitrogen Oxides (NOx), regulations on marine emissions have been gradually tightened, as with the regulations for automobile emissions. The regulations regarding pollutant emissions by ships are deliberated by the International Maritime Organization (IMO), a specialized organization of the United Nations.
Under the SOx emission regulations of the IMO MARPOL (International Convention for the Prevention of Pollution from Ships), the sulfur content in fuel has been tightened from 4.5% to 3.5% in 2012, and to 0.5% or less in 2020. In addition, even stricter regulations (0.1% sulfur or less) have been applied to fuels used in Emission Control Areas (ECA), such as the North Sea and the coast of the United States. Also, emission regulations for NOx have been tightened three times since 2005. Overall, the environmental impact of marine fuels has been gradually reduced.
However, environmental measures for marine fuels are not limited to SOx and NOx, but also include greenhouse gases (GHG). The current IMO agreement on GHG emissions calls for a 40% reduction in CO2 emissions per unit of transport volume by 2030, compared to 2008, and a 50% reduction in total GHG emissions by 2050, compared to 2008, and zero GHG emissions as soon as possible in this century.
Marine fuel demand has changed from those that are cheaper and more powerful to those that are more eco friendly and sustainable.

Use of Next-Generation Clean Fuels and Back to Wind Power

The 2030 CO2 emission regulation is thought to be achievable even for conventional engines that use marine HFO through low-power operation (reduced navigation speed) and the application of existing technologies. However, the 2050 regulation and zero emission ships would not be achievable using oil or natural gas-fuelled engines in common use today.
In the shipping and shipbuilding industries, various methods are currently being considered for achieving zero emissions in ships. These include electric propulsion ships loaded with batteries and next-generation marine fuels such as hydrogen, ammonia and bio, as well as methanation*.
At the same time, the use of wind power is being considered again as the ultimate clean energy, and MOL has been studying the introduction of wind assisted propulsion for cargo ships in its Wind Challenger Project since 2009. The first ship with a fiberglass sail is scheduled to be completed in 2022.

* Methanation is a technology for synthesizing methane, the main component in natural gas, through a chemical reaction between hydrogen and CO2 in a reactor filled with a catalyst. It uses CO2 separated and captured from industrial facilities. As the CO2 generated when combusting synthesized methane is considered to be offset by the separated and captured CO2, it is expected that CO2 emissions can be significantly reduced by using hydrogen generated by electrolyzing water with electricity derived from renewable energy.

The principles of wind power promotion, types of equipment, features, and advantages are introduced in
Blog: Wind power, the leading natural energy resource! 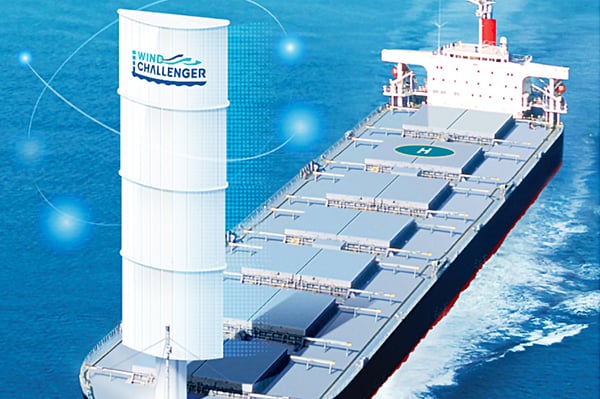 In June 2021, as a guide to achieve net zero GHG emission by 2050 and realizing a sustainable society, our company established the MOL Group Environmental Vision 2.1 with the following three medium to long-term targets:
① Deploy net zero emissions ocean-going vessels in the 2020s
② Reduce GHG emissions intensity by approximately 45% by 2035 (versus 2019)
③ With a concerted effort throughout the Group, achieve net zero GHG emissions by 2050
For the next generation on board this planet, the MOL Group will work collaboratively with our partners and stakeholders with creativity to resolve environmental issues. We will continue to provide solutions for issues of high importance such as the preservation of the marine environment, protection of biodiversity and prevention of air pollution, and in order to tackle climate change with utmost urgency, the MOL Group will make a concerted effort to achieve net zero GHG emissions by 2050. With these contributions for the sustainable development of our society and the preservation of nature, from the blue oceans, we sustain people's lives and ensure a prosperous future. 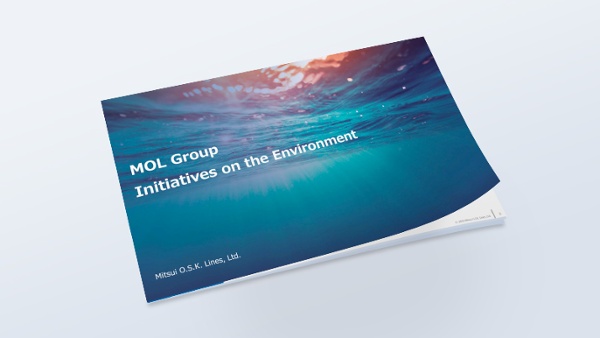