Various cargoes such as containers, automobiles, iron ore, coal, oil, etc. are transported by sea. The total volume of marine transportation is about 12 billion tons a year, of which about 25% is oil [crude oil and petroleum products]. In oil transportation, crude oil trade accounts for about 70% of the total oil shipments, and most of them are transported by VLCCs “Very Large Crude Carrier”.
In this article, I will introduce the size of VLCCs and their loading capacity.

What is the unit of crude oil "barrel"?

We often hear the news that " crude oil price was ○○ dollars per barrel yesterday." Why the "barrel" used in oil transactions, but "ton" or "liter"?
"barrel" is said to originate in the 1860s, soon after the oil industry was born in the United States when Pennsylvanian oil producers used wooden barrels to ship their crude oil, which commonly used to pack liquor, fish, molasses, and, etc. at the time.
At the beginning of crude oil trades, various barrels with different capacities were used for crude oil transportation. But in 1866, the capacity of these barrels was unified to 42 gallons [about 159 liters], and even today, more than 150 years later, the "barrel" is still commonly used as the unit of crude oil.
By the way, it will need about 200～250 liters of hot water to fill up a bathtub completely. Then, about 70 percent capacity of a bathtub is equivalent to 1 barrel. This 1 barrel of crude oil can sometimes trade at a high price over $100 or a negative price when there are no buyers.

Left: crude oil price per barrel. Right: just about 1 barrel in a bathtub.

How many barrels can load in VLCC?

In 2020, VLCCs were used for offshore storage tanks under the COVID-19 pandemic.

Related article : Why the tanker market was boosted by COVID-19
https://www.mol-service.com/blog/tanker-market-covid19

How many days worth of crude oil imports?

Most of the crude oil consumed in Japan is imported from the Middle East via 12,000 kilometers of navigation oneway, taking 45 to 50 days per voyage, including the time required for loading and discharging operation. Japan's current crude oil import is about 3 million barrels a day, so 2 million barrels of crude oil loaded in VLCC is equivalent to 16 hours [about 0.6 days] of Japanese demand. In other words, to ensure a stable supply of petroleum products for our daily use like gasoline, diesel oil, kerosene, etc., 1.5 fully loaded VLCCs are needed every day.
In China or United States, which import more crude oil than Japan, more tankers are needed for a stable energy supply, and the total number of VLCCs in the world today is about 800.

The length of VLCC is the same as Tokyo Tower

The typical LOA [length overall] of VLCC is about 330 meters, almost the same as Tokyo Tower or Tokyo Station, the width of the hull is about 60 meters, and the deck size is almost the same as the size of 3 football fields. The distance from the bottom of the ship to the top of the mast is approximately 65 meters [equivalent to an 18-story building], and the draught [the depth from the water surface to the bottom of the ship] exceeds 20 meters in a fully loaded condition. 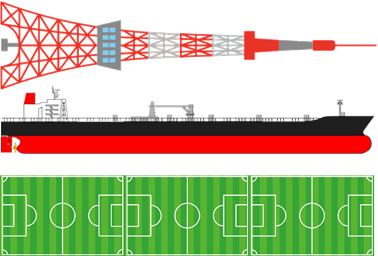 Due to their size, VLCCs are rarely moored directly to the shore wharf but moored to offshore facilities far from land and loading/discharging cargo through pipelines. The picture below is the "Keiyo sea berth" discharging facility locate in Tokyo Bay, where 150 VLCCs call at the port a year, to supply crude oil to four oil refineries on the Tokyo Bay area through submarine pipelines. 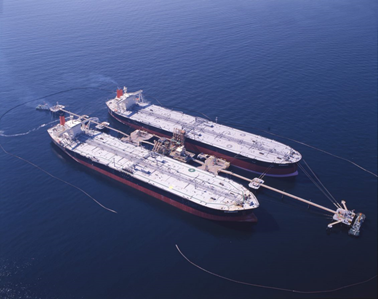 Two VLCCs are moored at the “Keiyo sea berth”
and discharging a cargo through submarine pipelines.

Double hull structure of the hull and loading/discharging of cargo

The outer panel of the ship’s body is doubled to prevent oil spills even in the unexpected grounding or collision. The light blue area in the below illustration is the ballast tank [tanks for seawater to adjust the balance of the ship], and the green area is the cargo tank where crude oil is loaded, to keep the cargo from spilling into the sea even if the outer panels are damaged.
The inside of the hull is usually divided into 17 tanks, and the ship can load multiple grades of crude oil at the same time without mixing.
For loading and discharging operations, the ship tanks and the shore tanks are connected by pipelines and hoses. At the loading port, crude oil is loaded in the ship tanks by shore pumps, and the cargo is discharged by the ship’s pump at the discharging port.
Usually, The VLCCs have three cargo pumps, and each pump can discharge about 35,000 barrels [5,500 cubic meters] of crude oil per hour. Then, an Olympic-sized pool [50x25x2 meters] of crude oil can pump up in less than 30 minutes. 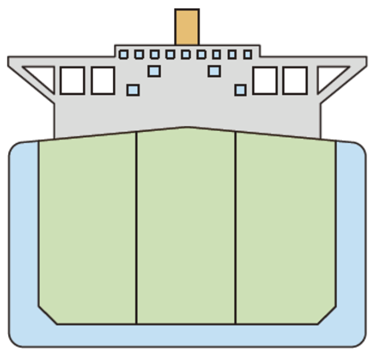 The huge engine of VLCC

The main engine of the VLCC, which generates the propulsion power of the ship, is a two-cycle diesel engine with six or seven cylinders. It is a huge structure not comparable with engines of automobiles or trucks.
The pistons have 800 millimeters diameter [bore], and the stroke exceeds 3 meters. The engine displacement is more than 10,000 liters with a maximum output of 38,000 horsepower and revolves the propeller 70 to 80 times per minute. Then the VLCC can navigate about 15 knots [28 kilometers per hour] at sea. 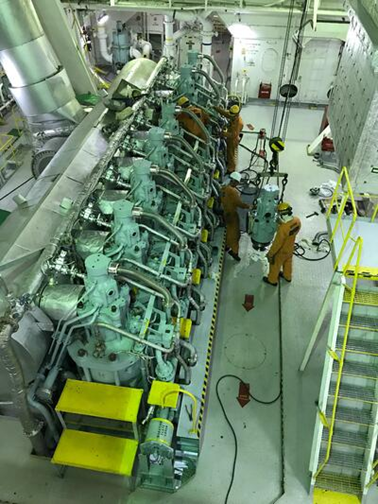 History of upsizing the tanker

Since the VLCC was first introduced in the 1960s to improve transport efficiency by upsizing tankers, the typical specifications of VLCCs have been established over the past 50 years.
In the 1970s, a series of ULCC “Ultra Large Crude Carrier” was built for further improvement of cost-efficiency. The world's largest merchant ship, Knock Nevis, delivered in 1979, was 458 meters in length and 69 meters in width and was able to load more than 4 million barrels of crude oil, doubled the capacity of a typical VLCC.
However, due to their extraordinary size, these ULCCs could call only limited ports and could not pass through narrow and shallow channels like the Strait of Malacca, which made their operation less efficient in reality. Then, many ULCCs were moored at specific ports and used as offshore tanks over time, and aged ULCCs were demolished one by one.
Now, the typical specs of VLCCs are 2 million barrels in capacity, 300,000 tons in payload, 330 meters in length, and 60 meters in width, which can call most of the major crude oil loading/discharging ports around the world.
It seems that bigger is not always better, but that each ship type has its optimal size, and there is a practical limitation for upsizing.

While petroleum products and crude oil continue to be essential energy for our daily use, demand for LNG “liquefied natural gas”, a more environmentally friendly energy source, has been increasing recently. And along with LNG and LNG carriers, the FSRU “Floating Storage and Regasification Unit” demand also increasing to enhance the flexible use of LNG in recent years.
As a leading company in oil tankers, LNG carriers, as well as FSRU, MOL can meet the various needs of all customers. 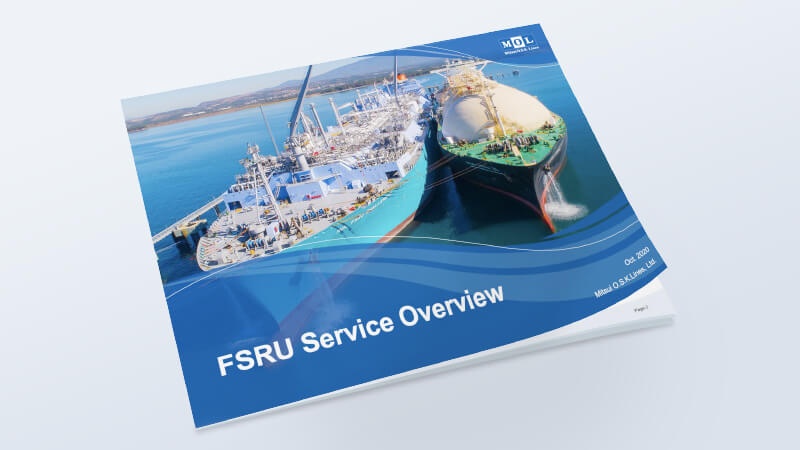