Wind propulsion systems installed on ships, such as rotor sails sold by MOL Techno-Trade, Ltd., are once again in the limelight around the world. In this article we will introduce the principles of wind power propulsion, types of equipment, and features and advantages.

Why is wind power getting so much attention now?

Until just 100 years ago, wind powered vessels were active as general merchant ships. The use of wind power goes back as far as the ancient Egyptians, who had a long history of sailing. They started sailing on open seas around 3000 B.C., sending ships to Phoenicia and importing Lebanese cedars among their shipping activities. A relief of a ship with 2 masts and oars for propulsion can be seen in the tomb of King Saffler from about 2700 B.C. The history of sailing vessels continued and evolved up until the 19 century, but with the appearance of oil fuelled ships the use of sailing vessels declined rapidly.

A major reason why the use of wind power on ships is now being reconsidered and efforts to modernize wind power are being made is the increasing trend towards reducing greenhouse gases (GHG) since around 2010. Ironically, this trend of finding alternatives to fossil fuels has revived the use of wind power as an energy source.
.
The modernization in wind power usage is partly supported by the evolution of materials technology. With the advent of lightweight and tough materials such as composites and carbon fibres, technical options for sails and kites harnessing wind power are expanding. Also, advances in information and control technologies are also making a significant contribution. Weather routing, navigation analysis technology, and automatic sail control reduces dependence on the skill of the crew and makes it possible to precisely control the sail and efficiently convert the wind into a propulsion force.

In addition to traditional soft sails (foldable textile cloth), there are now various types of wind propulsion systems under development, including hard sails (carbon fibre, aluminium, etc.), rotors, and kite towing. GHG reduction effects vary depending on the type of ship, propulsion system used, route, season, weather, etc., but if conditions overlap favourably, it is thought that a reduction of more than 20% in gas emissions will be possible for ocean-going ships, and is therefore attracting attention as an effective means to reduce the environmental impact of vessels.

A sailing ship around 1470 BC (source: Wikipedia)

For general merchant ships whose mission is to transport cargo safely and reliably, wind propulsion is considered a realistic way to reduce fuel consumption and GHG emissions by using wind power as a supplementary way to power the engine in addition to fossil fuels such as heavy oil.

As wind power can be included in the Energy Efficiency Design Index (EEDI) for ships established by the International Maritime Organization (IMO) , it is expected that wind power will be actively promoted in order to achieve the mandated EEDI (Fig. 2) and the horsepower reduction when using wind power is calculated using a probability calculation. The wind speed is set to a high probability level of around 7 m/s, which is smaller than the value generally found for North Pacific routes.

Although wind propulsion may at first glance seem like a ship with sails that can only utilize tailwinds, the basic mechanism for modern wind use on vessels is the same as for aircraft wings. LEFT figure shows the mechanism of an aircraft wing, where a small angle between the wings (sails) and the flow of wind generates a lift force (thrust force for sails) perpendicular to the wind flow.

Relationship between wind, wing and lift

Of particular note is that crosswinds cause engine driven ships to slant and rudder, resulting in lower fuel efficiency but, by using sails, this can be converted into a forward force. Conversely, tailwinds are not as effective as was generally thought, because the wind speed decreases relative to the ship’s speed and therefore does not provide as much assistance.

Modernizing the Use of Wind Power
（1）Rotor sail

The “cylindrical sail” gains propulsive power with the Magnus effect as the wind turns the cylinder of a rotor vertically installed on the deck. This type has drawn increasing attention lately. It works on the same principle as a baseball pitcher throwing a curveball when the ball curves because of its rotation. 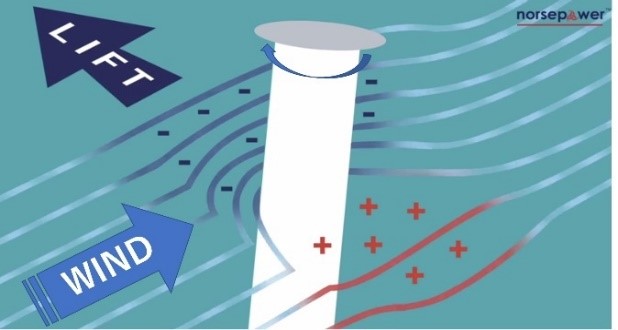 The figure below is a polar chart showing the thrust for each wind direction and velocity of the rotor sail, and shows the propulsion force for each wind strength (colour coding) when there is a wind direction indicated on the circumference. Propulsion force can be gained from all left, right, and front directions except for 25 degrees on the right and left. A 24 meters high and 4 meters diameter rotor sail with a 20 m/s diagonal backward wind speed of 20m/s can theoretically generate about 2000kW of thrust. 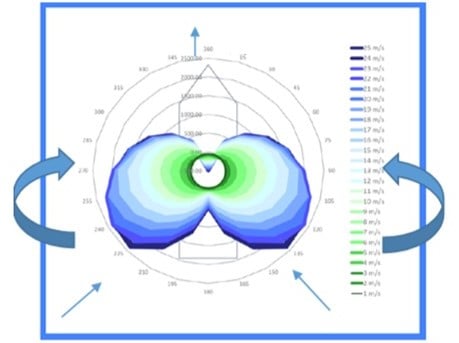 Thrust map for each wind direction and velocity (polar chart)

MOL Techno-Trade Ltd. as a distributor of rotor sails manufactured by Norsepower in Finland, has introduced rotor sail products and supported implementation studies in the shipping industry. The company has installed Norsepower rotor sails on ferries, RORO ships, and product tankers. Major shipbuilders in China and South Korea are also planning to install them on VLCCs (very large crude oil carriers) and VLOCs (very large ore carriers) or have adopted them as an installation option.
In the case of rotor sails installed on tankers, the outer rotating cylinder has a laminated structure of CFRP, GFRP, and urethane to reduce weight. According to the results of a one-year service analysis, an annual average energy saving effect of about 8% was found. 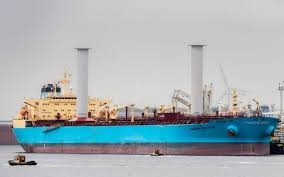 Other major manufacturers of rotor sails at present are ANEMOI of the United Kingdom and ECO FLETTNER of Germany.
(The rotor sail was invented by Anton Flettner, a German aeronautical engineer, and Eco Flettner uses his name as part of its company name.)

Please contact MOL Techno-Trade Ltd. if you are interested in learning more about how much fuel can be saved by installing rotor sails:
https://www.pbcf.jp/contact/

Modernizing the Use of Wind Power
(2) Wind Challenger (Hard sails)

MOL has also been installing hard sails as part of the Next-Generation Wind Powered Vessel Wind Challenger Project on a 100,000 ton bulker to be built at Oshima Shipbuilding Co., Ltd. Simulation results with a single sail indicate an average energy saving effect of about 5% on the Japan-Australia East Coast route and about 8% on the Japan-North America West Coast route.

The Wind Challenger will use FRP hard-wing sails which are more efficient in converting wind into thrust due to their wing shape, compared to soft sails such as those found on yachts. 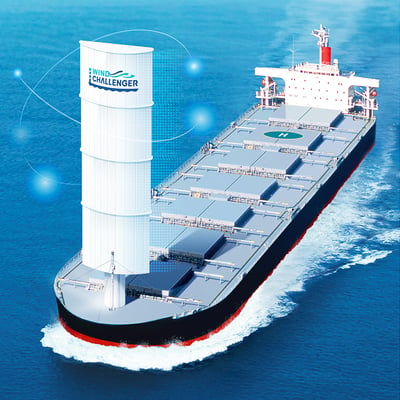 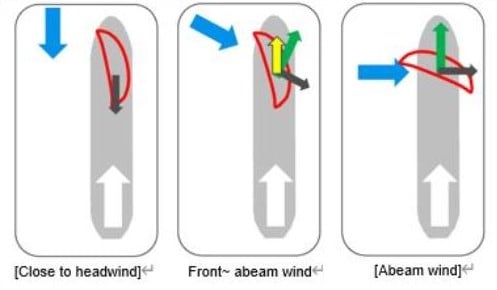 The figure above shows the sail operation method. When the wind blows from the front, the sails are fully shrunk to reduce resistance. For other angles, the angle is automatically adjusted so that thrust can be gained, and in addition reefing and expansion in full sail are also automatically carried out by measuring the wind direction, wind velocity, stress at the base of the mast, etc.

An example of another company adopting a hard wing sail is Wallenius Marine (Becker) in Europe who are studying the installation of a stretchable sail on a car carrier sometime after 2022. The hard wing sail, which can be folded in two vertically, differentiate it from the telescopic sails to be used for the Wind Challenger.

Modernizing the Use of Wind Power
(3) Wing assist hull design

MOL is also working on the development and realization of plans and elemental technologies for the next-generation concept ship as part of the "Ship Restoration (ISHIN) project", As a first step in this plan, in 2009 Mitsui O.S.K Lines worked with MOL Techno-Trade, Ltd. And Mitsui Engineering & Shipbuilding Akishima Research Institute to develop a concept for a car carrier in which the hull itself is “wing shaped”. The ship is called a wing assist hull design, and wind energy can be converted into thrust without additional equipment by making the hull itself into a wing shape. This maximizes the propulsive force by utilizing the principle that the lift force (mainly the leading edge thrust) is generated with the hull as the wing when diagonal wind comes over the water.

A simulation of an ocean navigation with this shape shows an average horsepower assist of 5 ~ 6% (5 ~ 6% GHG reduction). This shape can be adopted not only for car carriers, but also for ferries and cruise ships, and is a particularly cost-effective hull design that can be obtained simply by modifying the outer shape. We are continuing to study this design to maximize efficiencies and for implementation. 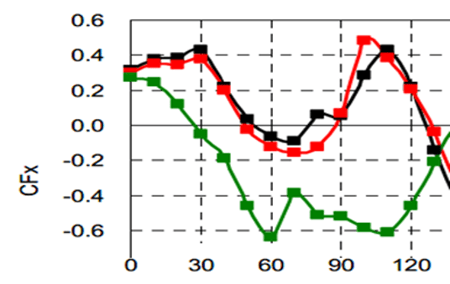 Modernizing the Use of Wind Power
(4)Suction wing

The present sail uses the wing principle to a greater or lesser extent, but the back of the wing has a high surface flow velocity and the flow may become turbulent and detached at the trailing edge of the wing. In an aircraft this is called stalling, and it can be dangerous due to the loss of lift force. In order to prevent this from happening in sails, a suction opening at the trailing edge of the wing is used, called a suction wing. In the right cross section of the left figure below, the lower part is upwind, and the upper triangular flap shifts by ± 45 degrees depending on the wind direction, closing one side of the suction ports and producing the effect of a flap.

Modernizing the Use of Wind Power
(5) Kite (Seawing)

The use of kites is also under consideration. The kite system from Airseas SAS, a subsidiary of Airbus, will be installed in Cape size bulkers by K-Line. Installation is scheduled for the end of 2021.
Since wind speeds increase with altitude, receiving wind at a higher altitude can reduce GHG emissions by more than 20%. Furthermore, the kite form is designed to be deployed and retrieved automatically using the mast on the bow, although deployment and retrieval during operation is still an issue. The kite is as large as 1000 square meters and makes figure-of-eight turns, moving at high speed to work as a wing and gain thrust.
https://www.kline.co.jp/en/news/csr/csr9020873502576627192/main/0/link/200819EN.pdf

Modernizing the Use of Wind Power
(6) Soft Sails 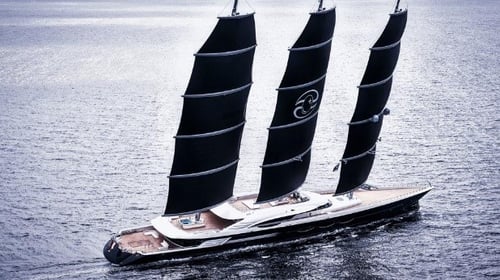 DKSTRA N.A’s 106-meter-long large yacht was launched in 2018.It adopts soft sails, but these are extended along with the wing-shape frames, so this is expected to generate performance comparable to that of hard sails. It is said that the maximum speed is 17 knots.

In addition, wind power utilization and battery-powered ships are considered to be mutually supportive.
In the case of the Aitoku Maru, a domestic sailing ship that has been put to practical use in the past, the horsepower reduction exceeded 50% on some days. If the rated output of the main engine is large, the main engine will continue to operate at a low load, so electric propulsion (diesel + battery) ships may be considered for using wind power as auxiliary power.

As mentioned above, the Mitsui O.S.K. Lines Group, from the sale of rotor sails to the development and implementation of Wind Challenger, is very much focused on wind as a clean and inexhaustible energy source, and is aiming to significantly reduce greenhouse gas emissions with vessels of an entirely new concept. The detailed structure and mechanism of the Wind Challenger, which was developed by integrating our group's ship technology know-how with our knowledge of ship operation, are summarized in the brochure shown below. 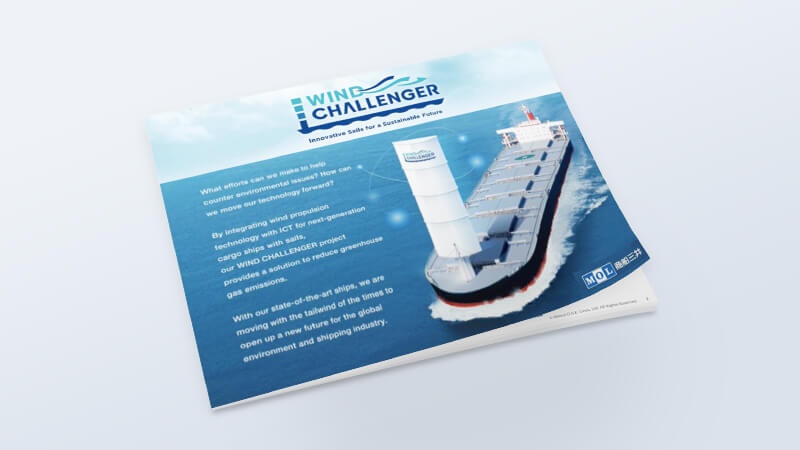 Joined MOL in 1979 and worked in the Technical Division , where he was involved in the planning and design of new ships and the maintenance of ships in service. Since 2007, he has been working for MOL Techno-Trade, Ltd., where he has been involved in the global sales of PBCF, the sale of parts and accessories for ships, and the development of technologies such as ISHIN hull forms. Currently a technical advisor to MOL.