Liquefied Natural Gas (LNG) is an environmentally friendly energy source that emits less carbon dioxide than coal or oil. Natural gas is cooled to minus 162 degrees Celsius which turns it into a liquid. Liquefaction reduces the volume to 1/600 of that of gas and enables it to be transported in large quantities by sea. The volume of LNG trade, which plays a leading role in international gas trading, is expected to increase by 21% in 2025 compared to 2019. Demand for maritime transport is expected to continue to grow, supported by further increases in imports in the Asia-Pacific region and firm demand for imports in Europe.
LNG has recently been introduced as an alternative to heavy oil as a marine fuel. This article introduces the current status and future prospects of LNG fuel for ships.

Advantages of LNG as a Ships Fuel

With the IMO ‘s tightening of SOx (sulfur oxides) regulations introduced in January 2020*1, most ocean-going vessels now use low-sulfur heavy oil. However, the use of low sulfur heavy oil does not change CO2 emissions, it is clear that the fuel is inadequate in achieving the IMO goal of reducing CO2 emissions by more than 40% in 2030 compared to 2008.

For this reason, the introduction of LNG-fueled vessels which do not use heavy oil is drawing attention in the long term. LNG is said to have a low environmental impact because it removes sulfur in the pre-liquefaction process, so it emits almost no Sulfur Oxides (SOx) or Particulate Matter (PM) when burned and emits less NOx (nitrogen oxides) and CO2 than other fossil fuels. It is also relatively safe because its specific gravity is lighter than that of air and it is easy to diffuse, so there is less risk of explosion. In addition, its proven reserves surpass that of oil and its ability to provide a stable long-term supply for more than 50 years is a key advantage.

Globally, the number of LNG-fueled vessels has increased from 18 completed vessels in 2010 to 175 currently in service, with more than 200 on order in 2020 (Reference: DNV GL). Most of the vessels in service are operated in Europe and it is expected that the shift from heavy oil to LNG or other alternative fuels will be further accelerated as a result of the strengthening of SOx regulations in January 2020. In Japan, Mitsui O.S.K. Lines, Ltd.(MOL) and Nippon Yusen Kaisha(NYK) have launched Japan's first LNG-fueled tugboats, and plans to build LNG-fueled vessels are continuing. MOL's LNG-fueled tugboat “Ishin” was carried out  LNG-bunkering  in Kobe as well as in Nagoya.

*1 SOx emission regulations
IMO is limiting the sulfur content of bunker fuel to reduce vessel exhaust emissions of SOx and prevent air pollution. The current limit of 3.5% sulfur content in bunker fuel is being reduced to 0.5% as of January 2020. Main measures include installation of onboard scrubbers, use of complied fuel, and transition to LNG as fuel.

What are the disadvantages of LNG-fueled vessels?

LNG fuel has a low environmental impact, but there are three general disadvantages to using it as a ships fuel.
① Installation of engines that can use LNG fuel
② Capital investment is also required in equipment other than engines, such as fuel tanks 2 to 3 times larger than conventional ones and re-liquefaction equipment.
③ Cost at the time of new construction is 15 ~ 30% higher compared to conventional fueled vessels

However, as environmental regulations become increasingly stringent, LNG-fueled vessels are expected to continue to grow in market share because of their advantages, such as "zero sulfur content, about 25% reduction in CO2 emissions, and overwhelmingly low nitrogen compound emissions," and "LNG is more competitively priced than expensive low-sulfur heavy oil.

Europe is leading the way in the field of LNG-fueled vessels, with most of these vessels operating in Europe. This is due to the fact that companies there took the lead in accepting strict sulfur content regulations in the Emission Control Areas (ECA) of the North Sea and the Baltic Sea. The size of LNG-fueled vessel is getting larger and Emission Control Areas are expanding. CMA CGM, a major French container shipping company, has placed an order for 9 LNG-fueled  container ships (23,000 TEU) with the CSSC (China Shipping Industry Group) of China. The first vessel was completed in 2019, and this and the following vessels are scheduled to begin service on routes between Asia and Europe.

The development of LNG bunkering infrastructure is also essential for the widespread use of LNG-fueled ships, and Europe is also leading the way. The Port of Rotterdam (the Netherlands), the Port of Amsterdam (the Netherlands), the Port of Zeebrugge (Belgium), the Port of Barcelona (Spain), and other major ports can LNG bunkering.
While normal bunkering is done by the "Truck to Ship" method, with LNG supply facilities at the terminal side, bunkering for larger vessels is now often done by the "Ship to Ship" method. As of February 2020, 12 LNG-bunkering vessels are in operation and 27 vessels have been ordered. (Reference: DNV GL) Most of them will operate within the European region. Sweden and Finland, which are located in the Baltic Sea region, are also aggressively developing fuel supply vessels. 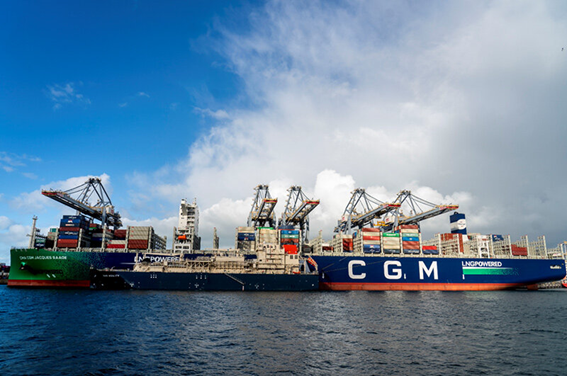 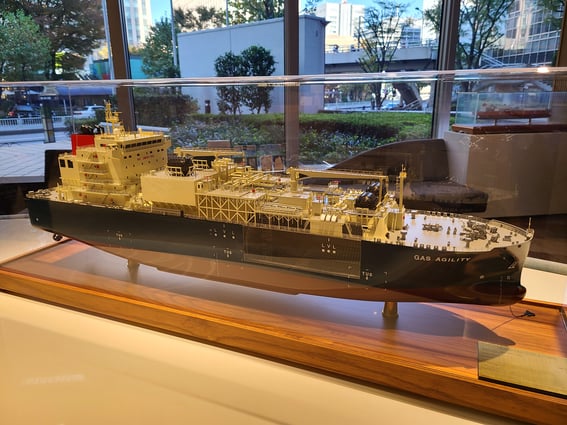 Even Outside Europe, LNG bunkering infrastructure is accelerating on a global scale. At the Port of Singapore, the world's largest bunkering terminal, LNG-Bunkering vessels are scheduled to begin operating in the fourth quarter of 2020.Japanese shipping companies are also working to improve their LNG bunkering infrastructure overseas. In the case of MOL, In cooperation with Pavilion Gas Pte Ltd., a government-owned energy company, we plan to start operating a 12,000m3 LNG bunkering vessel, one of the largest in Asia, in 2021.

Japan recovers from its slow start

In Japan, LNG-fueled ships have been discussed at one time or another, but have been slow to become a reality due to short-term profitability concerns. Nevertheless, LNG-fueled ships are gradually coming into operation, and plans for their construction have been announced one after another, attracting attention. The Ministry of Land, Infrastructure, Transport and Tourism (MLIT), port authorities, and energy supply companies have also begun to take action, and the supply of LNG fuel to ships has begun to improve.

MOL once considered installation of an LNG-fueled ferry. In December 2009,n December 2009, the company announced its next-generation ship concept, "ISHIN NEXT - MOL SMART SHIP PROJECT". The plan was to use LNG-fueled engines for these next-generation ferries. The plan was that with the addition of several energy-saving measures, "CO2 emissions will be reduced by 50%, NOX (nitrogen oxides) by 90%, and SOX (sulfur oxides) by nearly 100%," and that LNG-fueled ferries would be introduced in five years.
Unfortunately, this vision was not realized. Unfortunately, this plan never came to fruition because the price gap between LNG fuel and existing ships fuel (low-sulfur heavy oil) narrowed as the price of crude oil continued to fall after the collapse of Lehman Brothers in 2008, and the business environment was no longer conducive to investing in LNG-fueled vessels.


In November 2019, 10 years later, the company announced that it would build the first of 2 LNG fuel ferries in Japan. Ferry Sunflower, a group company will be put into service sequentially from the end of 2022 to the first half of 2023 as replacements for existing vessels on the Osaka-Beppu route.

The construction of LNG-fueled vessel will continue. In December 2019, MOL together with NYK announced the construction of the world's first large LNG-fueled Large Coal Carrier for Kyushu Electric Power Co., Inc.(Kyuden) The LNG procured for Kyuden's thermal power plants will be supplied to the vessels as fuel at the loading facility of Kitakyushu Liquefied Natural Gas Co., Inc., a 75% owned subsidiary of Kyuden. 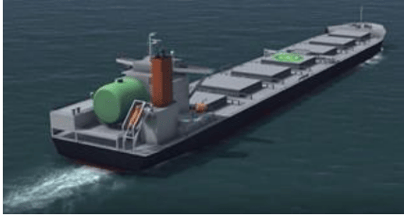 In Japan, efforts are underway to supply LNG. The construction of an LNG-bunkering vessel, which will be able to supply fuel to LNG bunkering ships by alongside them at sea, has started in October 2019. The new vessel will be capable of supplying both LNG and low-sulfur fuel oil, and is scheduled to start supplying the two fuels in Tokyo Bay by the end of 2021. In Japan, LNG is currently supplied from land using tank lorries and other means, but with the use of LNG-bunkering  vessels, it is possible to supply large amounts of fuel, as well as to load and supply fuel at the same time.
In this way, the use of LNG fuel is accelerating in Japan.

What is a Next-generation fuels for ships?

The use of LNG as a ships fuel is rapidly advancing in the ocean shipping industry, where stricter emission regulations are being implemented. LNG has been positioned as an effective and economically beneficial alternative fuel that meets and contributes to the long-term strategy proposed by the IMO to reduce GreenHouse Gas emissions from ships.
A variety of Next-generation fuels are being considered for decarbonization, and you can download a document that summarizes the trends in clean alternative fuels for ships, including a list of the characteristics of each fuel. 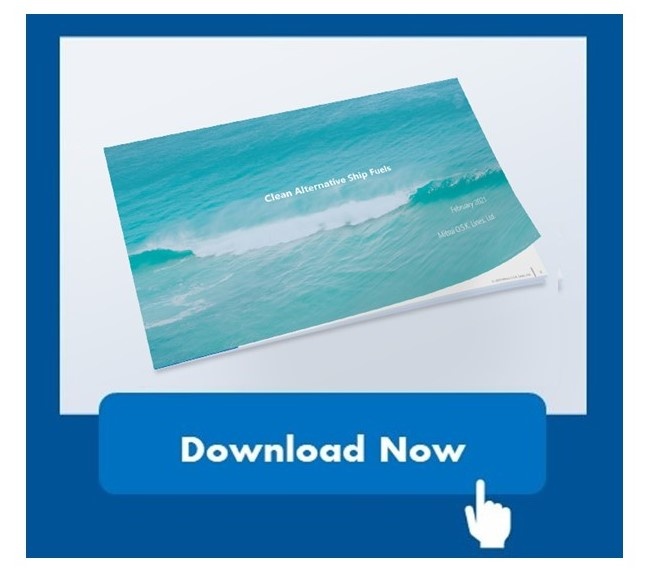 Joined MOL in 2014 after working for a credit card company. After being in charge of car carriers administration, operating bulk carriers, now I’ve been involved in the operation of this website, in the marketing division. I'm also in charge of website news letter. Easy to subscribe, please click below!